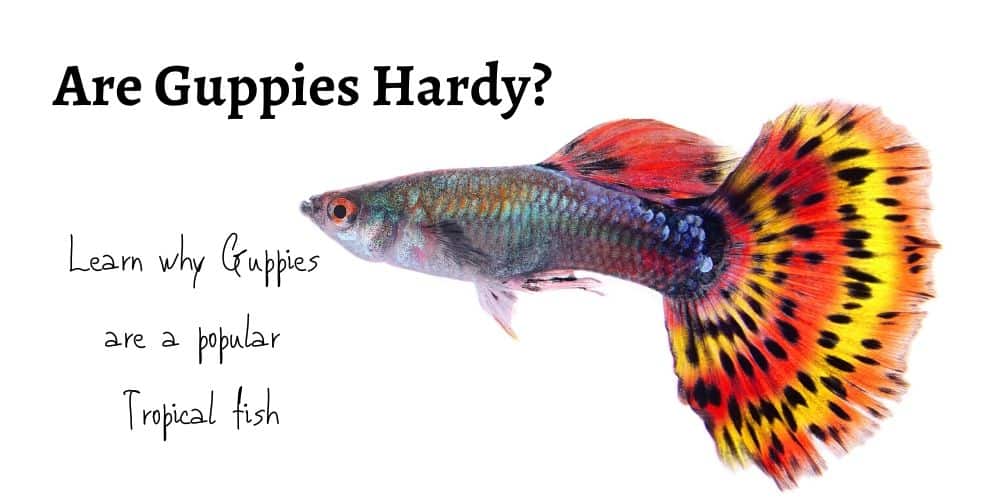 Guppies are one of the most popular tropical aquarium fish and are known for their low maintenance and hardiness. These freshwater aquarium fish make the perfect tank mate with other small to medium freshwater fish, making them an excellent choice to a fish enthusiast’s aquarium.

Guppies are widely available and come in fantastic colors, giving them an adorable exotic tropical appearance, but are guppies hardy fish?

Are Guppies Hardy? These fish are indeed hardy but are not invincible and are susceptible, as are all tropical fish, to illness if kept in incorrect or poor water conditions. Brightly colored, inexpensive and hardy, make Guppies a popular choice with aquarists.

Guppies Adapt To Their Homes Quickly

Guppies have risen in popularity steadily, and are now a household fish for any small to the medium freshwater aquarium. Known as the rainbow fish, the guppy is exceptionally adaptive to a large number of habitats and can be found living in the wild all over the globe.

Their hardy nature, and quick adaption to strange environments, makes them an excellent choice of research species for scientists, which has also added to their availability and subsequent popularity as a pet species of fish.

Many fish owners choose guppies as their fish of choice because of their legendary hardy nature and renowned lack of maintenance. However, many are surprised when their supposedly low maintenance fish ends up sick and in some extreme cases, dying.

Even though this comes as a shock to many fish owners, it is widespread with guppies, and fish owners must be constantly vigilant of their fish’s health and wellbeing.

Let’s see in more detail why guppies are hardy

Here, we will go over all the things that answer the question ‘are guppies hardy?’ and go through some common problems that may arise, when having guppies in your freshwater aquarium.

What is a Guppy?

Guppies, also known widely as ‘millionfish’ or ‘rainbowfish’, are a freshwater species of tropical fish. Guppies are live-bearing fish, meaning the female fish will carry her eggs internally and give birth to the fish when they hatch.

Guppies are a universal choice of fish for many aquariums due to their beautiful and exotic coloring on their tails, hence the name, rainbowfish.

Guppies are extraordinarily versatile and can adapt to a variety of habitats, giving them a reputation as an extremely hardy fish species. Guppies are mainly found in other groups of guppies in the wild and have been shown to do very poorly when left in an aquarium on their own.

Although extremely non-aggressive, guppies have been known to bite or nip at other fish from time to time. But it’s very rare. This behavior seems to be reserved to the male guppy, however, and can usually be avoided by feeding your guppies regularly.

Guppies get their hardy reputation mostly for their ability to adapt to any a large variety of different ecological environments. They are mainly kept in freshwater tanks; however, they can also survive in water with salt levels over 150% of typical freshwater ecosystems. (often referred to as ‘brackish’).

Guppies can get along peacefully with many varieties of fish, giving them a name as a very versatile choice of pet for fish owners worldwide.

Although very hardy, many problems can arise in your guppy’s lifespan that may lead to their illness and in some extreme cases, when left unattended, death. To ensure a long and healthy life for your pet guppy, there are several things you should be highly vigilant for.

In answering the question ‘are guppies hardy? and they are indeed a very hardy fish, they are not immune to illness. Guppies are still susceptible to several illnesses, that may cause extreme trauma to your fish, and may even lead to the death of a whole tank of fish.

Many of these illnesses are quite easy to spot early on and can be healed with pet medicines and increased care.

However, some steps can be taken to ensure your guppies do not develop these illnesses in the first place.

Oodinium can wreak havoc on a whole tank of fish if left unattended and allowed to pass between fish. The illness is commonly referred to as ‘gold dust’, because of the fine dust-like golden substance which begins to build upon the guppy’s skin.

This disease is highly contagious and can result in the guppy’s scales peeling away, exposing the flesh underneath. If caught early, there are several steps that can be taken to treat Oodinium.

White spot is another disease that can be detrimental to your guppy’s health, although the small white dots that give this disease its name are hard to see, your guppy’s erratic behavior is often a telltale sign of an Ick infection.

Your guppy may lose its appetite and refuse food which can also be a symptom of white spot. If caught early, this can easily be treated with medication.

Although extremely hardy, guppies seem to be very susceptible to fin rot, which mainly affects the guppy’s tail in extreme cases.

This can be caused by either a fungal or bacterial infection and can be extremely hard to treat when spread from one fish to another. A sure sign of fin rot is the deterioration of your guppy’s tail fins and the subsequent decay that gives this illness its name.

This disease is extremely contagious and can lead to an extensive tank infection very quickly.

Although known as Guppy Disease, Protozoan can also affect a large variety of fish, and its contagious nature can see it spread amongst a tank rapidly. This is a waterborne parasite that penetrates the fish’s skin to gain access to its bloodstream.

Protozoan can be extremely difficult to diagnose and is the main culprit in the sudden deaths of many guppies.

Guppy bent spine syndrome is a disease called Scoliosis, which affects not only fish but humans also. Popular tropical fish like guppies, develop a bent spine and unfortunately, there is no cure. Euthanasia is often the outcome.

Many guppies are born with this condition. Guppies that develop this condition are often bullied and nipped by other fish and can suffer greatly before death.

Keep an eye on any guppy that has this condition and consider euthanasia as quickly as possible to spare the fish discomfort.

How to Stop Your Guppy Getting Sick

Although extremely hardy, guppies are prone to many of the above diseases and illnesses, and you, as a pet owner, should take utmost care in providing a safe environment for your guppy to flourish. There are some safeguards you can adopt to ensure the health of your guppy such as:

Are Guppies hardy? Yes!! As you can probably tell from the intro to this article, we love guppy fish. They come in all sizes as well as a myriad of colors.

The common guppy that you see and purchase from most pet stores and aquarium shops are farm bred and are extremely hardy fish. The more collectible and sort-after wild guppy fish, are less hardy and struggle to adapt to home aquariums. Hence they are not as popular and don’t come onto the market too often.

The basic facts and rules to stick to when keeping guppies are as follows: Provide good water quality, a balanced fresh diet, and safe tank mates and you’ll enjoy your guppy for many years to come. Read exactly how long here in our Guppy lifespan article.