I think it would be fair to say that in the average aquarium it is pretty clear that our fish can see. After all, they do the ‘happy dance’ when they see you approaching with food and move towards that food when you drop it into the aquarium. Without eyesight, this would not be feasible.

Do fish have good eyesight-It is believed that fish are fully capable of forming and seeing detailed images. However, this is only part of the story with the eyes working merely as receptors, and the brain being needed to process and interpret the image. However, when it comes to what they see, and how quickly their eyes can adjust to a different light, they fall way below par.

It’s worth mentioning that a fish’s ability to see and to what degree can be complicated by the fact that they live in water. After all, water clarity ranges from crystal clear to murky as hell, and everything in between! It is like they live in a perpetual fog; sometimes thick and sometimes thin.

Having said that, compared to human eyesight, which we will use as a guide to decide how good a fish’s eyesight is, a fish on a really clear day can only see 100 to 150 meters. A human, by comparison, has a visual field that can extend for miles.

Based on this, and this alone, a fish’s vision is not that good. However, there are more aspects of their sight that we need to look at before making a final judgment, starting with where we were originally headed, how fish’s eyes work. 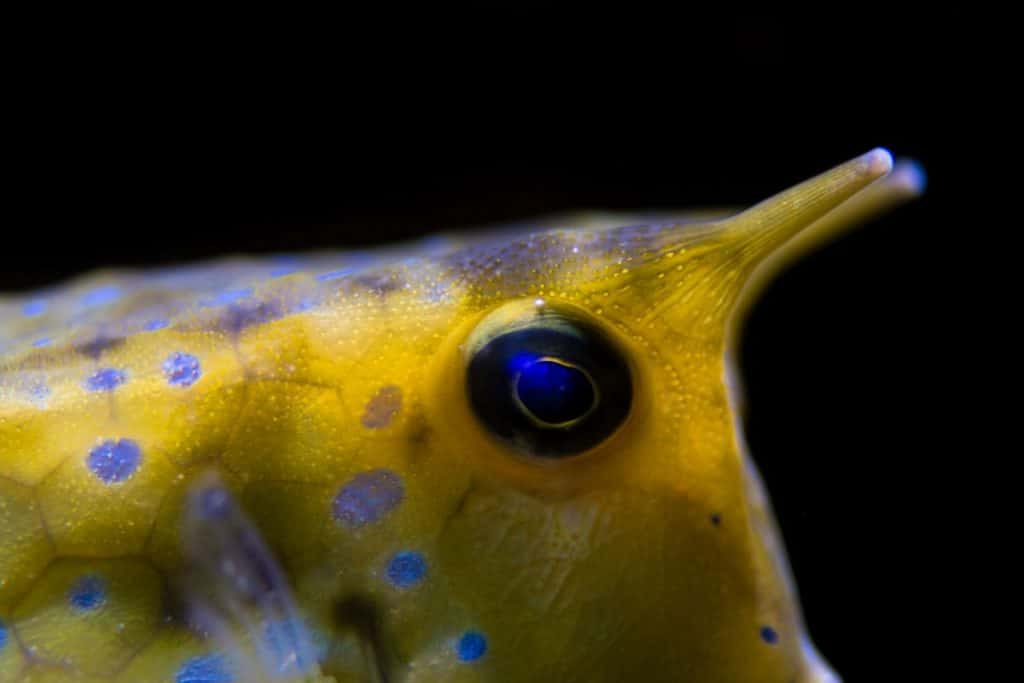 How do fishes eye work?

From a structural point of view, a fish’s eye is very similar to ours. They both have an outer cornea, iris, lens, and retina that includes rods and cones. This is where the similarities end, however, as a fish’s eye shape and workings differ from our own.

Compared to humans eyes and other mammals which have a rather flat lens, fish have distinctly rounded ones that protrude outwards. This, and also the fact that they are denser than human lenses is what gives a fish that ‘bug-eyed’ appearance that we all know and love.

They do, however, serve a greater purpose than to make them look cute, in that they also give them far greater peripheral vision. This is due to the heightened ability to bend the light so it can be focussed onto the retina.

Speaking of light, human eyes focus it by automatically changing the shape of the lens which fish cannot do due to their density. Instead, fish alter the actual position of the lens; pulling it back to see into the distance and pushing it forward to see objects close up. Specialized muscles perform this action which is known as ‘accommodation.’

Adjusting the eyes to lighting levels is also performed in a different way for fish as they cannot contract and dilate the pupil in the same manner we do. Rather, they undergo a shifting of the rods, cones, and dark pigment granules. This process, in fish, can take 30 to 60 minutes to complete.

What do fish see?

It is believed that fish are fully capable of forming and seeing detailed images. However, this is only part of the story with the eyes working merely as receptors, and the brain being needed to process and interpret the image. This process works by the brain putting together snippets of information such as movement, shape, and color to create a composite image.

Unlike humans who devote large portions of their brain to analyzing visual images, fish do not with their relatively tiny brains. This means that even top predators such as Pike and Perch ‘see’ only images that are simple. Basic shapes, motions, color highlights, and sizes are all that fish are capable of seeing.

Interestingly, though not related to how well they see, it is believed that fish do not commit to memory what they have seen in a natural environment. They primarily have the vision to seek food and avoid prey, not sightsee.

Do fish see in color?

Absolutely, and a color vision that far surpasses our own. Why? Because many species can also see the ultra-violet end of the color spectrum well beyond just violet. How they do this, is not really understood, although it is thought to have evolved over time.

As it is developed through evolution, the ability to see ultra-violet is thought to be advantageous, and that it may be related to foraging, mate selection, and communication. As an example, African Cichlids which are largely blue in color are reflective in UV light. This makes them highly attractive to females, with them picking the most reflective mates.

Conclusion: Do fish have good eyesight?

It is certain that in some aspects such as peripheral vision and the ability to see ultra-violet light the fish’s vision far surpasses our own. However, when it comes to what they see, and how quickly their eyes can adjust to a different light, they fall way below par.

Can fish hear well? This is another question that we answer. Click here!

It is clear from the above that fish vision and human vision are too different to compare. Rather, what we should be doing is looking at what fish need their vision for, and seeing, pardon the pun, if it is capable of fulfilling those needs.

Since fish need their vision to hunt prey, choose mates, and avoid predators it would appear that their simple in some ways, and complex in others eyesight is ample for what they need. Therefore, we can only come to the conclusion that, yes, the majority of fish, indeed have good eyesight.