Unique, oddball, mesmerizing, special, elegant, peaceful, and graceful are some, but certainly not all, of the words that could be used to describe the Ghost Glass Catfish perfectly.

They are all of these things and more, making them a popular and ideal addition to any aquarium.

Ghost Glass Catfish: A freshwater fish, with two long barbels, Ghost Glass Catfish originate from Southeast Asia (endemic in Thailand). Fill their home with vegetation to mimic their natural environment. You will find these transparent beauties in most aquarium stores. The average cost of each is in the region of $4. Reaching a maximum size of 8cm, the average size being 6.5 cm, the Ghost Glass Catfish can live up to 8 years.

Quite often this species of transparent, yes transparent, Catfish is confused with another that is very similar. The Kryptopterus Biccirrhis, however, is far larger and more aggressive. The scientific name that they have both been given, Kryptopterus, refers to the fact that they have a hidden fin. Kryptos meaning hidden, and Pterygio meaning fin.

In an aquarium where the Ghost Glass Catfish feels safe and secure, they will school together in very peaceful groups. This can make for an incredible spectacle, especially when they are resting, all facing the same way and appearing to just float on the spot. They are, however, still swimming, although they appear still. They put just enough effort in, against the current of the water, to stay where they are.

This schooling may not, however, occur for up to a few weeks after they have been added to an aquarium. This is due to the Ghost Glass Catfish being timid by nature and taking a while to settle. If disturbed or stressed they will head for cover, but once reassured everything is OK will soon come back.

Ghost Glass Catfish are active by day but do not like bright light. They will congregate where it is dimmer in their aquarium. Their typical pose is head up, tail down and at a position of 45 degrees. Here they will sit holding stationary in mid water with constant flicks of their tails. You should be aware, however, that they will not display this behavior unless they are kept in groups. Solo specimens, or even groups of two or three, will become stressed, stop eating, and pine away.

Though Ghost Glass Catfish are omnivores that will feast upon a variety of foods, they will not do so voraciously. They are timid eaters that will be put off feeding by more boisterous fish which could be a problem. Feeding these fish in a different area of the aquarium can be a solution. However, you will need to attract the other tank inhabitants away.

It would be fair to say that the word ‘Catfish’ makes you think of a large freshwater fish that lurks at the bottom of the aquarium and has prominent barbels. This is not, however, how the Ghost Glass Catfish looks; it put simply defies this image!

Want to know what’s the best food for most catfish?

Though this Catfish does have barbels, they are not prominent, nor the first thing you will notice. Rather, you will be struck by the fact that these fish are completely transparent apart from what appears like a silver sack and its bones. You can see every rib down its body vertically, and down the center is its spinal column. This transparency is perfect for the Ghost Glass Catfish to hide from predators, it provides perfect camouflage.

The fins of this species are virtually invisible though you will notice a slightly raised portion on their back. This is in fact where the dorsal fin is. Their tail fin and ventral fin are, however, virtually unnoticeable, though they are there, and used for swimming up and down in the water column. On average a Ghost Glass Catfish will reach around 4 inches. They can, however, grow an extra couple of inches in an aquarium where they are happy.

The internal organs of the Ghost Glass Catfish are all within the silver looking sack we have already mentioned at the head end of their long and slender bodies. They also have fairly long barbels that protrude from just above the mouth. These barbels, though not very visible, can be extremely sensitive. In fact, they make them very aware of changes in their surroundings and possibly allow them to detect electromagnetic waves.

The Ghost Glass Catfish originally hails from Thailand but can also be found in Borneo, Java, Sumatra, and the Great Sunda Islands. They prefer moderately moving rivers and streams where they mostly stay in the middle of the water column.

Rarely straying from the safety of the river bed, they rely on their barbels due to low visibility. Without these sensory organs, they would find it much harder to survive in their natural habitat. Their transparency is also another adaptation that developed for survival purposes. It disguises them into looking similar to river debris and therefore being relatively safe from predators.

As in the aquarium, Ghost Glass Catfish live in large and tight-knit social groups in rivers of the far East. They are a schooling fish that will swim and rest together often all traveling and facing in the same direction. They eat zooplankton, small worms, invertebrates, mosquito larvae, and given the opportunity, small fish such as baby guppies.

It would be incredibly remiss not to mention straight away the characteristic that of course the Ghost Glass Catfish is most well known for – its transparency! It is indeed how it earns its most well-used nickname, the Skeleton Cat, which describes how this fish looks perfectly.

From a care point of view, this species would be best known as picky, requiring stable water parameters at all times. Additionally, an aquarium set up and companions that make them feel safe. Once set up right, however, Ghost Glass Catfish will be happy and thrive well. Well cared for, they will live for up to a rather lengthy eight years.

The most important factor in Ghost Glass Catfish care is the aquarium’s water parameters. This species is a delicate one that will die if you keep them in inadequate water conditions. The temperature of a Ghost Glass Catfish aquarium needs to be 75 to 85 °F or 24 to 27 ℃. KH and pH are also very important and should be 8 to 12 and 6.5 to 7 respectively.

Also, water-related is the flow into the aquarium. This needs to be of a moderate manner in order to ensure that your Ghost Glass Catfish can display their natural behavior. They enjoy and need a water flow strong enough for them to swim into and remain stationary, but not so strong that it will push them away.

Aquarium size will need to be of around 30 gallons to house a small group comfortably. However, if you wish to house them with other community fish or keep a large group of them, which is always stunning to look at, you will need to upsize substantially.

Check our Java Fern and other suitable plants for sale on Amazon here!

Ghost Glass Catfish enjoy common hardy plants such as Java fern, Java moss, Hornwort, Wisteria, Green pennyworth, and Blue stricta. They will use these plants to hide in and avoid bright direct light. The substrate should be fine, preferably sand, to avoid damage to their barbels.

Also incredibly important is that you keep Ghost Glass Catfish in as large a group as you possibly can. The larger the group, the happier Ghost Glass Catfish will be, and the more they will behave naturally and attractively. Small groups or solo kept specimens of this species will only end in sorrow. They will become stressed, stop eating, and potentially, even probably, pine away.

We cannot be stress enough, so we’ll reiterate; water quality is of the highest importance when caring for your Ghost Glass Catfish. Poor standards will most likely be the cause of any disease or ailments they suffer. An indication that they are not faring well in the water you are providing will be their transparency becoming slightly opaque and a reluctance to feed.

Common illnesses Ghost Glass Catfish may suffer from include: Ich, Dropsy, Fungus, and Lice. All of which are usually due to poor water conditions. To avoid these, ensure that you check your water parameters frequently with a water testing kit. We recommend you to perform weekly water changes and maintenance.

As an omnivore that feeds upon a wide and varied diet in their natural environment, it should not be difficult to find foods that your Ghost Glass Catfish will love. Their natural diet can be pretty much replicated by choosing foods such as grindal worms, daphnia, brine shrimp, and moina.

Read all about Bloodworms and how and why they are good for your fish including Glass Catfish in one of our review articles by clicking this links.

Ghost Glass Catfish will also feed on flake and pellet, tubifex, bloodworm, mosquito larvae, and other frozen or live foods. You should ensure, however, that you offer food in small pieces as this species only has a small mouth.

Your Ghost Glass Catfish should be fed once or twice a day, in amounts that they can eat within around two minutes. We advise you to supervise their feeding. This is because, as already mentioned, they can be bullied away from food by more boisterous species. 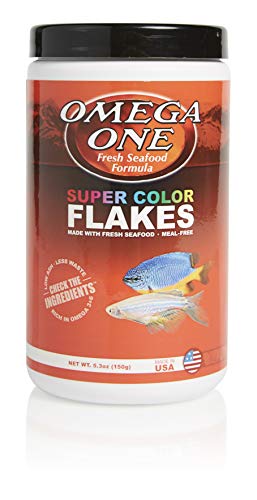 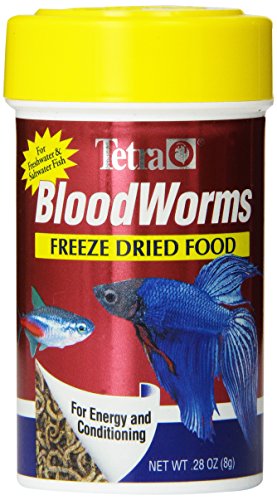 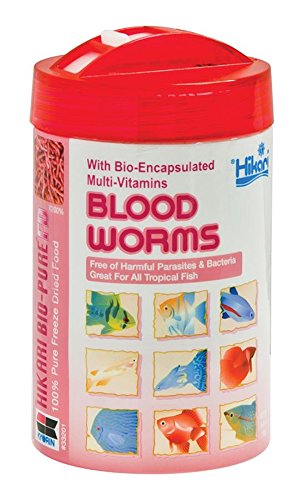 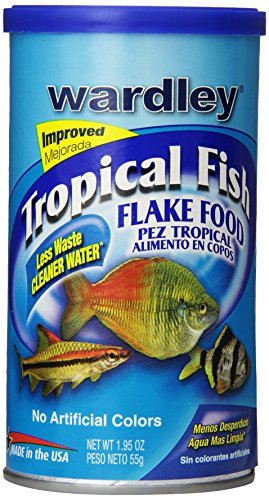 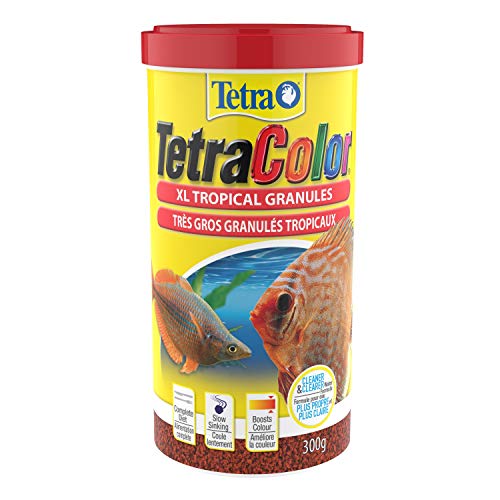 It is difficult to distinguish between the male and female Ghost Glass Catfish as they have no obvious sexual dimorphism. However, females may be slightly larger than the males and display larger stomachs where they keep their eggs.

In their natural habitat, Ghost Glass Catfish spawn seasonally during times of torrential rain. This may explain why there are very few reports of successful breeding within the aquarium. However, this should not put you off trying as long as you are prepared to try and mimic their natural breeding conditions.

To start the breeding process you will need to lower the temperature in your aquarium to approximately 73 °F or 23 °C and add small amounts of fresh water every day. This will help to mimic the rainy season which is, of course, when this species breeds. You should also feed them high levels of live food as this will give them the energy they need to spawn.

If successful, the female will spread her eggs around the aquarium on plants. These will hatch after three to four days and be large enough to swim freely and feed on baby brine shrimp.

Ghost Glass Catfish are perfect for most community aquariums as long as their tank mates are peaceful and will not bother them. Ideally, you will have species such as Mollies, Swordtails, Pearl Danios, Dwarf Gouramis, Corydoras, Loaches, and of course plenty of other Ghost Glass Catfish.

Read our article: 15 Perfect Freshwater Fish For Beginners for a complete guide to suitable tank mates for Glass Catfish.

You should avoid any species that are large and aggressive as they can and probably will pick on or eat your Ghost Glass Catfish. Species such as Tiger Fish, Rainbow Sharks, Red Tail Sharks, Cichlids, and Oscars should all be avoided.

Whilst the Ghost Glass Catfish does have some requirements that would be more suitable to the moderately experienced aquarist, they are definitely worth the extra TLC they require. Unfortunately, however, it is pretty impossible to describe just how attractive a group of schooling Ghost Glass Catfish can be; they have to be seen to be believed. The larger the group, the better the experience, and one that we guarantee you will love.