The amazing looking Green Clown Goby – Gobiodon atrangulatus is one of our favorite saltwater marine fish. Just look at that face, how could you not love this fish.

Gobiodon atrangulatus or Earspot Coral Goby as it’s sometimes known is perfect for any community saltwater aquarium. However, they will nip at soft corals. They won’t harm harder, branch corals or bother any other fish.

They are very peaceful marine fish and will live happily in a suitable sized saltwater aquarium.

Let’s have a more in-depth look at this stunning little fish!

Where do Green Clown Goby come from?

In the wild, these fish can be found in pairs resting amongst the branches of Acropora coral in the reefs and laggons of Fiji & Indonesia. They rarely go below 15m ( 49 Feet ).

There short and stocky body with an oversized head makes them stand out from the crowd.

These fish have adapted well to reef life, their modified ventral fins have fused to make a kind of suction cup that helps them to maintain their position on coral branches in strong currents. Perfect for life in the lagoons where tide currents can be strong.

These fish can be very shy in the wild found hiding amongst the corals and polyps but in the home aquariums, they soon find their confidence and venture out from their hiding place to feed and explore the tank.

The ones I have owned in the past have become an integral part of daily life within my own saltwater tank.

What size aquarium do gobies need?

Because of their size, these fish are sometimes recommended for nano and smaller reef tanks, we would offer a word of warning on this.

Firstly if you have a smaller saltwater tank then you will be limited on how many species you keep. One specimen is recommended in small nano type tanks otherwise there will be fights and conflicts over territory resulting in one species being harmed and even killed.

The second reason is the risk of damaging corals in smaller reef tanks. These fish are fine in larger reef tanks, however in smaller ones they may damage the corals and polyps buy living in them and nipping at them. The larger the tank the more change they will be happy and have the room to grow. This will reduce the chances of them damaging corals.

Green Clown Gobies may be kept in groups, but only in larger aquariums where there is an abundance of hiding places/territories. They will often pair up and spawn if you’re lucky. We will go into breeding further in this article, it’s an amazing site to see these fish breeding.

Water conditions are normal saltwater condition 72-78° F, dKH 8-12, pH 8.1-8.4, sg 1.020-1.025. Ensure you have a strong flow throughout the tank to simulate their natural ree environment. The best way to do that is with a wave/current maker. We use the JVP-101A wave maker in some of our smaller saltwater aquariums. One will work in a 50 Gallon aquarium, for larger aquariums use one each side.

How do you tell the sex of gobies?

These fish are bi-directional protogynous hermaphrodites, which means if your house two they have the ability to change sex and form a spawning pair. This is not as common in gobies.

Green Clown gobies (Gobiodon atrangulatus) are easy to breed, however, raising their young is harder.

Sexing these fish is difficult, but during the start of breeding the males may change color and develop a longer dorsal fin. 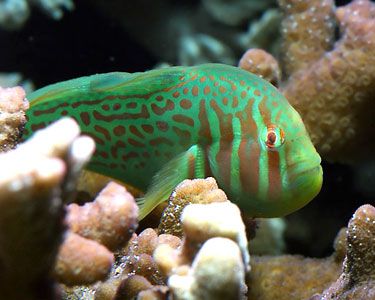 Is it easy to breed Green Clown Gobys?

These fish tend to clean and prepare a small area of coral polyps in order to make the perfect place to lay their eggs. Spawning in other areas of the tank is not unheard of but they do prefer corals.

The male fish will perform a strange dance in front of the female just before spawning. She will lay her eggs on the coral branch, and these are immediately fertilized and then guarded by the male.

The eggs are very small, around 1mm in size and laid in numbers counting 500+. The presence of the eggs on the coral may cause a small amount of tissue recession in that area, but this should recover quickly once the eggs have hatched (4-5 days, dependent on water temperature).

The larvae are tiny and require appropriately sized foods such as cultured rotifers and copepods and newly hatched brine shrimp.

What do green clown goby eat?

These fish are not hard to feed. They are Carnivores and will eat brine shrimp, finely chopped meaty foods and even dried flakes.

Sinking tablets are also a good idea if you have fast feeding fish in the tank. These will ensure your Clown Goby doesn’t miss out at feeding times.

My Green Clown Goby love Omega sinking marine pellets. You can buy them online at Chewy.com

Are Gobies aggressive and can they live peacefully with other fish?

These fish are perfectly fine in most mixed saltwater aquarium. I had mine housed with Cleaner wrasse, Jewel Damsel Fish, Orchid Dottybacks, Racoon Butterfly, and a longhorn cowfish.

All live fine together in a community saltwater aquarium.

These fish produce a thick toxic body slim that stops other fish from eating them. It’s like a self-defense system, having said this you don’t want to house them with carnivores. Otherwise, they may have a surprise if they try to attack them. They only use this in self-defense and are perfectly safe to keep with other peaceful aquarium fish. They are not dangerous to humans unless you try to eat them!

Don’t worry about buying a pair, they will change sex and form a breeding pair in the right conditions and given a tank large enough.

To conclude our article we would encourage anyone to buy some of these amazing fish. I absolutely loved my Gobiodon atrangulatus – Clown Goby, Green. I thought he was cute and always got the attention in my tank with his big smile and a huge head.