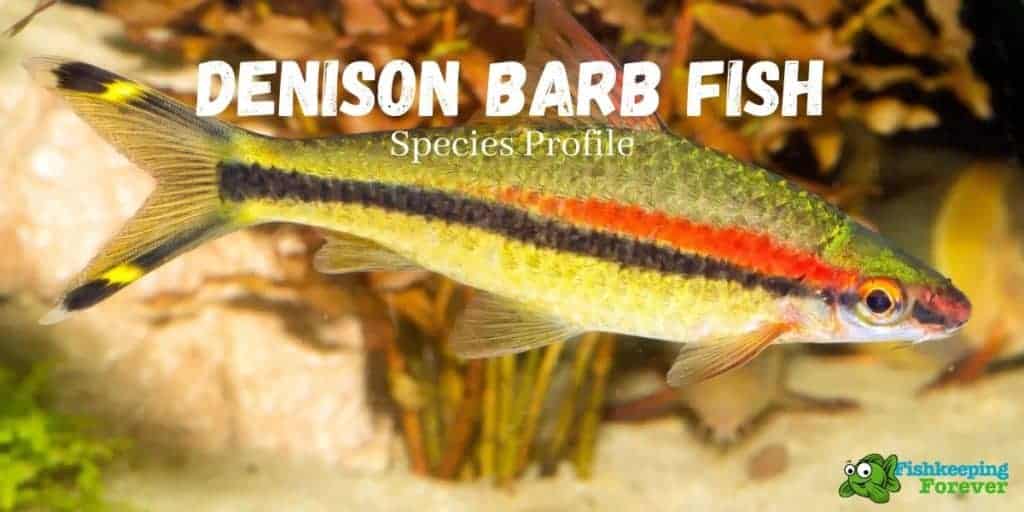 A shoal of these barbs will certainly add color and drama to any aquarium due to their endangered conservation status they are an exclusive find.

Learn everything you need to know to provide a great home for these cheeky fish in our comprehensive guide covering all aspects of caring for Denison Barbs.

The origins of the Denison Barb fish

Torpedo fish are benthopelagic members of the diverse Cyprinidae family of fish. Like many other barbs, the Denison Barb is a smaller fish and spends its days as part of a shoal among one of the most diverse communities of freshwater fish, amphibians, and reptiles in the world!

It has only been widely known as an ornamental fish since the 1990s, but subsequently has been heavily fished for the aquarium trade and is now endangered. For this reason, aquarists should avoid purchasing wild-caught Denison Barbs.

There are two to three distinct populations scattered across the river basin which vary in size and temperament but are all known as Denison Barbs.

This intriguing fish hails from fast-flowing rivers and hill streams of the Western Ghats in India. It is within this spectacularly ecologically diverse mountain range that the Torpedo Barb makes its home, and the territory spans some of India’s most naturally beautiful provinces including Kerala and Goa.

Located in a number of rivers, these Barbs enjoy subtropical waters with rocky pools and dense bankside vegetation. Clean and crystal clear waters that have great oxygenation and flow are essential to this fish and should be translated to the aquarium environment you create for it.

The names and monikers of the Denison Barb

Denison Barbs have a number of names that draw from their stunning physical characteristics, their mountain home, and the various taxonomic terms attributed to them.

One of the most beautiful names is Sahyadria denisonii, its Latin binomial name which is taken from  ‘Sahyadri’, the mountain range in the Western Ghats. The name Denison comes from a former British Governor of Madras, Sir William Denison.

This barb can also be sourced under a range of alternate names including:

The Sahyadria chalakkudiensisa bears a striking similarity to the Denison Barb, but is less bright in color and can be quite aggressive. There is also an extremely rare variant called the grey and gold Denison barb.

Given the name, you should expect an elongated torpedo-shaped fish. The base of its tail is broad and beneath its mouthparts are two barbels that it uses in searching for food. Females tend to be more robust with a rounder belly than the males.

Size of the Denison Barb

Depending on the regional variant, Red Line Torpedoes can grow quite large (over 15cm), but most adult fish will achieve a length of 12cm (4.5 inches).

It is impossible to miss the vivid red stripe of the Denison Barb and once you have seen one, it will remain easily recognizable. On a background of silver scales, the red line runs horizontally along its body, from the about through the eye towards the middle of the body.

Beneath, a bold black line runs from the head to the tail. Bright yellow dashes adorn their bifid tail. Older fish may have a green-blue coloration on their heads.

You can expect a Denison Barb fish to live between 4-6 years if it is disease-free and kept in good condition. Larger specimens can be quite hardy and some of these fish can live for 8-9 years.

Denison’sare described as being a sociable and gregarious species and are peaceable dwellers in tanks. They create a vivid and engaging display with their shoaling and darting mating rituals.

It is an easy-going fish but as with most barbs, it can be a fin nipper and prey upon smaller fish and fry.  Giving them adequate room and plenty of food mitigates most issues. To avoid stress and aggression, it is best to acquire a shoal of at least 4-6 with males and females.

Some owners only purchase one or two of these fish due to high cost and so run into problems with aggression as they cannot express their natural behaviors. This will create a beautiful display and help your Torpedoes achieve their best coloration.

Due to their critical endangerment and restriction placed on their harvesting by the Indian Government, the captive breeding of these barbs is gaining increasing interest. Hormones are often used to induce ovulation in females for commercial breeding.

They can be successfully bred in a tank and with good water purity, warmth, and suitable cover females will spawn, quickly followed by an attendant male who will fertilize the eggs.

This egg-scattering species will scatter eggs across aquarium plants. Soft acidic water has been found to aid spawning, and young fry grows under the cover of plants and substrate.

These fish are omnivorous and in the wild are opportunists, preying on insects, invertebrates, and small freshwater crustaceans and mollusks. In the tank, a varied and colorful diet works best.

Some keepers report that a diet rich in carotenoids and astaxanthin enhances its coloration.  Thankfully Torpedo Barbs have a good appetite and once acclimatized should fare well on a varied diet of flaked, pelleted and frozen foods including:

Here is our recommended feeding guide

Looking after Denison Barbs in the aquarium

A nod to the natural environment and conditions of this fish will go a long way in establishing it in your tank. Remember this barb is used to fast-moving mountain water, which sets a high standard for your water chemistry and purity.

With such a beautiful fish it is well worth going all out to create a stunning aquascape that will match its needs and show off this barb’s features to best effect. Denison Barbs can also jump so it is worth ensuring your tank is suitably covered.

What size tank does a Snakeskin Barb need?

Torpedo Barbs will want to swim and swim some more! They enjoy fast-moving water and are known to swim against the current in their natural habitat. As each fish can easily surpass 10cm in size you need to invest in a large tank that will provide adequate space. If not, aggression and stress will set in. Upwards of 60 gallons will be necessary.

Water movement and a high level of oxygenation are vital for Torpedos, so you will need to invest in a pump with a good turnover, spray bar, or powerhead which has the ability to maintain constant water flow.

Lighting should be moderate for this fish, taking advantage of floating foliage and covering aquatic plants. Ensure that rocky hiding spots are provided for periods of shelter.

Water temperature for the Snakeskin Barb

Denison Barbs can tolerate cooler temperatures than many other barbs, but fluctuating or prolonged cool water will stress them. A water temperature of 15 to 25 degrees Celsius (59-77 degrees Fahrenheit) should be consistently maintained.

Remember you are competing with mountain streams for water purity with this fish.

Water purity and oxygenation need to be high so active filtration is necessary. Ammonia levels should be kept negligible as this fish is very sensitive to it.

Create an ideal mountain stream aquascape for your Torpedo Barbs!

Use the natural habitat of this fish to guide your setup with the inclusion of rocks, caves, and driftwood where these colorful fish can dart and hide. Add lots of foliage with hard, tough-leaved aquatic plants such as Java Fern, Hornwort, Hairgrass, Blood Stargrass, Rotala, Anubias, or Bolbitis species planted in a sandy and gravel substrate.

It is best not to be too precious about the arrangement of your aquarium as these fish are large enough to uproot some of your plants.

These peaceful freshwater fish can be readily integrated into peaceful communities with fish of similar size or slightly larger. The water parameters have a range they love to shoal, so they should always be introduced as a group. Space and access to food will keep problems at bay.

Here is a selection of ideal tank mates for the Torpedo Barb:

These fish can usually be looked after a moderately experienced aquarist without problems, but keepers should be vigilant for problems and seek to treat disease promptly before the fish becomes very weakened.

Wild-caught Torpedo Barbs may be carrying diseases and parasites that can be introduced to your tank. A big problem is the overheating of tanks which contain these fish, due to their ‘tropical’ designation, despite them living in cooler, mountain waters in their natural habitat.

A lack of space can also be a stressor and effort should be made to avoid slips in water chemistry and cleanliness.

This is a condition that affects the swim bladder, a gas-filled internal organ that fishes possess to aid and control their buoyancy. This sensitive organ can be affected by gastrointestinal problems such as constipation from overfeeding or parasites.

This leads to the barb having abnormal swimming and either sinking to the bottom of the tank or floating to the top. Treatments include reducing water temperature, cleaning the water with the addition of aquarium salt, and adjustment of the water flow.

This condition, also known as mouth rot, looks as painful as it is and is caused by Flavobacterium organisms that can be carried by imported fish. These painful white fluffy lesions affect the mouth, fins, and body and lead to loss of appetite and weight. Aquarium salt, water changes, and antimicrobials are the main treatments.

This condition is caused by the bacterium Flexibacter columnaris, which is endemic in freshwater. It affects the fins, which become ragged and subsequently involves gills, mouthparts, and dorsum. Breathing becomes labored with gill involvement and it carries a high mortality.

Gill flukes are parasites that attach to the gills and skin of the Torpedo Barb. Healthy fish can tolerate them, but if their numbers increase they can weaken these barbs and cause a secondary infection. They are treated with Praziquantel and strict attention to water quality.

It’s easy to see why the Denison Barb has such huge popularity in recent years. It’s beautiful and distinctive features will enliven any tank and despite its high cost ( of upwards of $15 per fish) it is simple to take care of.

Provided attention is paid to the basics of aquarium management, these straightforward barbs should enjoy a long life. As mentioned above, sourcing captive-bred specimens will help preserve this stunning fish in the wild.